It started with a stagnant trail plan, some creative community leaders, and a six-pack of beer.

Today, CV Link – an ambitious, 40-mile active transportation project with pedestrian, biking and golf-cart paths – is helping to put the Coachella Valley Association of Governments (CVAG) on the map.

CVAG’s members include 10 cities, three tribal nations and the County of Riverside. It was formed in 1973 as the Regional Anti-Air Pollution Authority, which was created to oppose an oil refinery proposed nearby in the City of Banning. CVAG’s authority has expanded over time, and today it coordinates regional transportation, homelessness services and green energy programs in both the Coachella and Palo Verde valleys.

Through Measure A, a sales tax Riverside County voters passed in 1988, CVAG helps plan and fund some of the Coachella Valley’s biggest road, bridge and interchange projects. But until 2011, CVAG had never been the lead agency on a transportation project.

Which gets us back to that six pack.

A handful of political officials were brainstorming ways to tap some of the millions of dollars in air quality mitigation funds being released by South Coast Air Quality Management District. At the same time, leaders at the Desert Healthcare District stumbled upon a shelved plan to create a bike path along the Whitewater River stormwater channel, which traverses the Coachella Valley’s most urbanized area.

These conversations prompted CVAG Executive Director Tom Kirk to ask an interesting question: What if the plan was for more than a bike path? The Coachella Valley already embraces golf carts – which were invented in the desert and are used on local roadways – as well as their counterpart, the neighborhood electric vehicle. A late-night confab, fueled by a certain adult beverage, lead to CV Link being born.

The project is impressive: It uses a dual-path design, with a 14-foot-wide paved path for golf carts and bikes and a 6-foot-wide softer pedestrian path.

What if the plan was for more than a bike path?
The unique design includes shade structures, access points that have benches and water stations, and a focus on safety through bridges and under-crossings that keep active transportation modes away from vehicles on roadways. CV Link will ultimately span more than 40 miles, from Palm Springs to Coachella, and connect schools, parks, employment centers, other public spaces. The $100 million project will become the spine of a new active transportation network built in the heart of existing cities to improve air quality and public health for generations.

“CV Link fulfills a decade-long vision to connect the Coachella Valley with a hiking and biking path,” CVAG’s Kirk said. “Far too many people are discouraged from running and walking along our roadways because they see how dangerous it can be. We need to get cyclists and pedestrians off the sides of our roads and on to safe routes of their own.”

The CVAG Executive Committee has taken a series of votes to further reinforce the regional importance of active transportation investments. CVAG not only allocated $20 million of Measure A sales tax revenue for CV Link, but also dedicated $18.655 from the county’s share of State Transportation Improvement Project (STIP) funding — a funding source typically used for regional roadways and local highways. 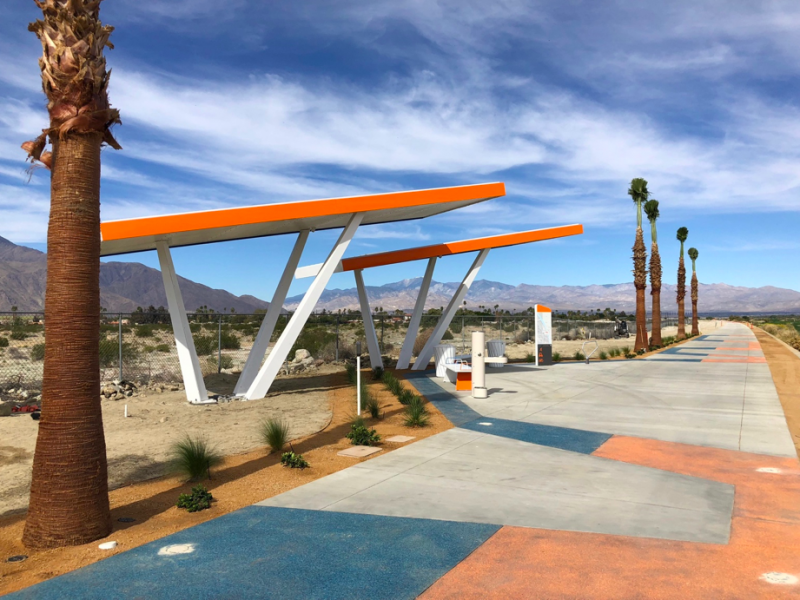 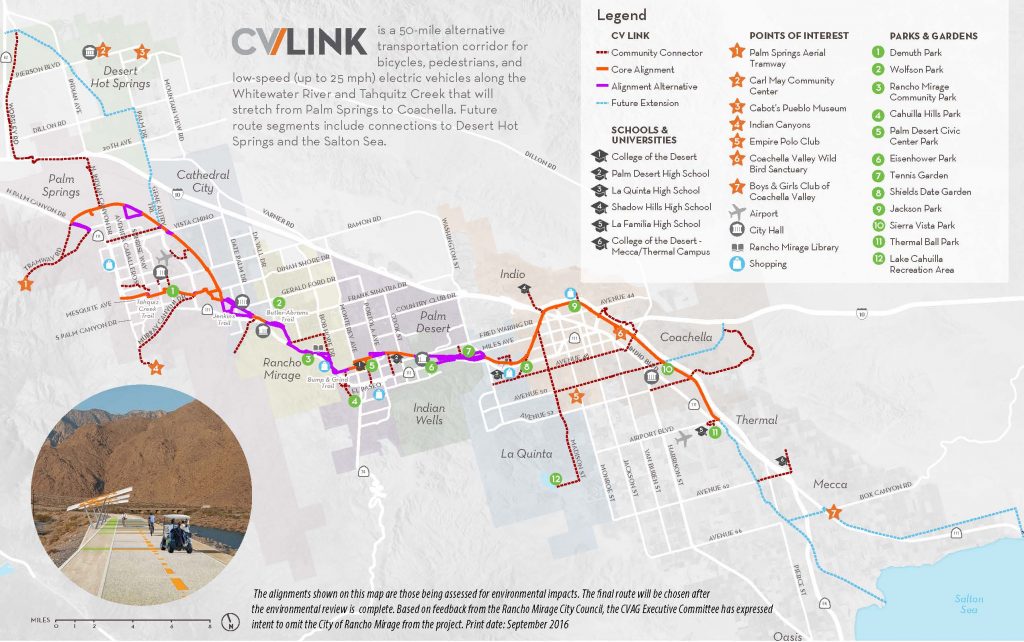 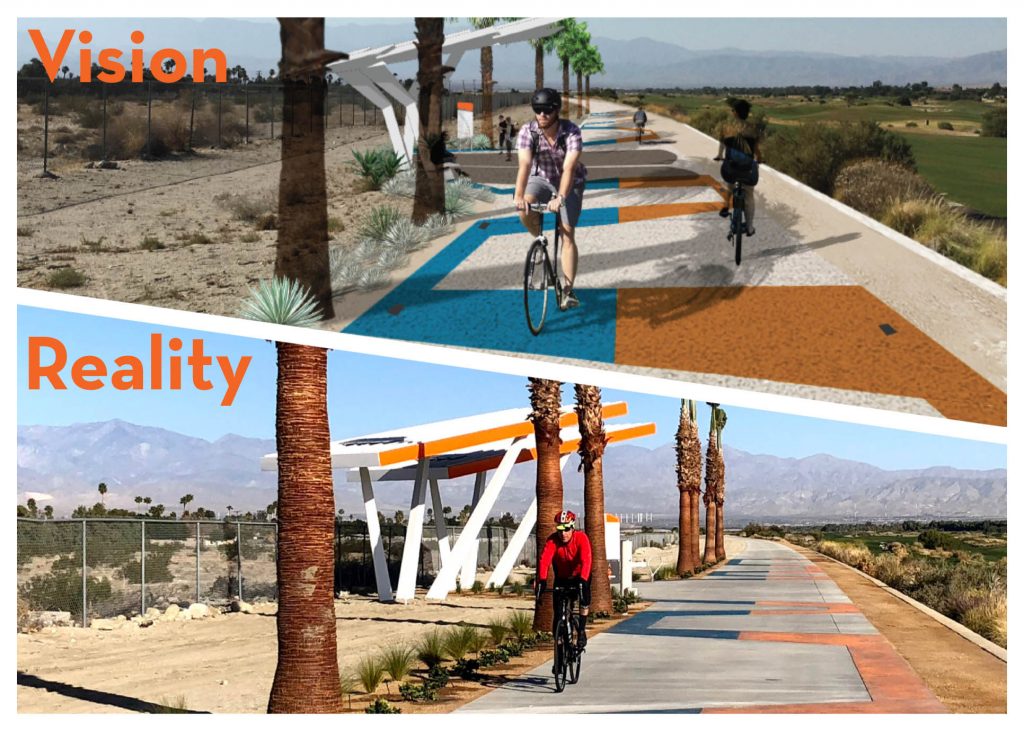 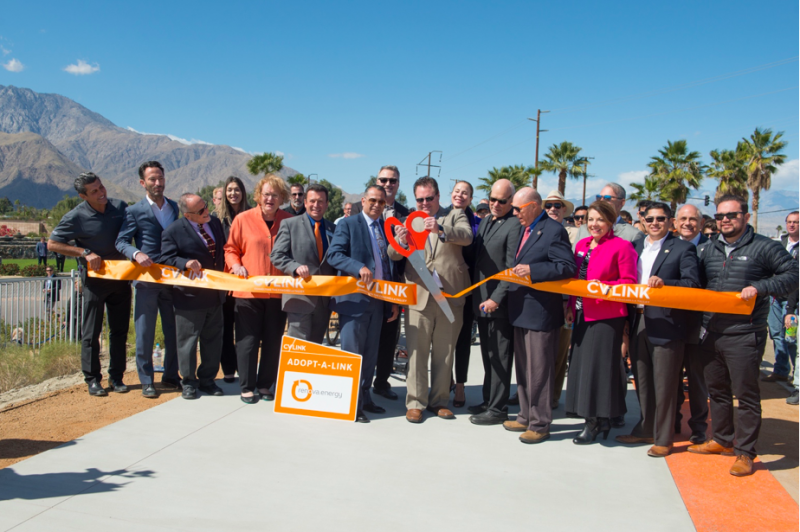 Four years into its development, council members in the City of Rancho Mirage, followed by some of their counterparts in the City of Indian Wells, began to push back on CVAG’s plans. Both cities are members of CVAG, and they had initially been supportive. CVAG staff dedicated months of meetings to answering questions about the route alternatives and future maintenance costs, the cities opted out of the project.

CV Link has faced a legal battle. In late 2017, when the first part of the project was under construction, former Palm Desert Councilmember Jim Ferguson sued CVAG, the Riverside County Transportation Commission and South Coast Air Quality Management District over the project’s funding plan, namely the use of  Measure A, the local sales tax. All three agencies defended the decisions. In March 2018, on the eve of the first court hearing, a Riverside County Superior Court Judge upheld the funding decisions by dismissing the lawsuit.

“Ultimately, the public scrutiny has made CV Link a better project for our community,”

CVAG also faced scrutiny for its application for ATP Cycle 3. Initially, the California Transportation Commission (CTC) staff recommended a $24 million award for CV Link. But before the funding was approved, it came to the attention of CVAG and the CTC that the application was incorrectly scored. CVAG accepted the revised CTC score of 85.5 points and went on to be awarded $5.584 million in Cycle 3; another $5.208 million was awarded soon thereafter through the ATP augmentation awards.

“Ultimately, the public scrutiny has made CV Link a better project for our community,” Kirk told CALCOG.

So what is the status of the project today?

CVAG has acquired more than $100 million for the project through various state, federal and regional funding sources, including the previously mentioned ATP awards.

To date, 3.5 miles of the project have been built in the cities of Cathedral City and Palm Springs. CVAG intends to start construction on nearly 20 miles in 2020, located primarily in the cities of Palm Springs, Palm Desert, La Quinta, Indio and Coachella. Their 2020 plans got an added boost earlier this year, when the CTC released $29.447 million for the project. The funding was previously secured, but CVAG could not start this year’s construction without the CTC’s authorization to actually spend the money. A construction contract for some of this 2020 work was awarded in the City of Palm Desert in July, and another should be awarded this fall.

The team continues to work to obtain easements and right-of-way along the remaining route, and has the funding to achieve full build-out within the next five years. When completed, CV Link will provide significant environmental, health, and economic benefits for residents and visitors.

“CV Link will be a game-changer for the Coachella Valley,” CVAG’s Kirk said. “We’re very excited to have the rest of the project under construction.”

No doubt more adult beverages will be poured to celebrate its completion.