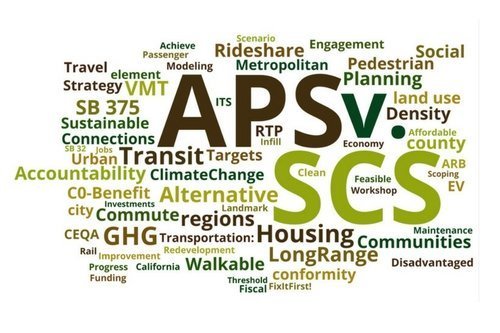 The Air Resources Board (ARB) is close to setting its next round of GHG reduction targets under SB 375. Here we address a related issue: whether an accepted Sustainable Communities Strategy (SCS)–as opposed to an accepted Alternative Planning Strategy (APS)–is required to be eligible for certain types of funding.

Our conclusion: the intent, spirit, and plain language of SB 375 encourages ambitious improvements and strategies, whether it be in the form of an SCS or APS.

SB 375 requires Metropolitan Planning Organizations (MPOs) to develop a Regional Transportation Plan (RTP) to meet the GHG Emission Target set by ARB, but only if there is a feasible way to do so. The “feasibility” condition assures that an overly onerous state requirement would not interfere with federal transportation policies. Remember, SB 375 added the GHG target to the federally-required RTP.  Under federal rules, the RTP is “fiscally constrained,” meaning that all the projects in the plan must derive from funds that are reasonably foreseeable. This analysis also applies to the likelihood of land use development.

In simpler terms, the RTP cannot be built on unrealistic funding projections or unlikely land use outcomes. This assures adherence to air conformity rules under the Clean Air Act: allowing unrealistic assumptions would allow regions to take credit for air quality improvements that are unlikely to happen.

So what to do in an instance when there is no “feasible” way to achieve the GHG target?  SB 375 requires MPOs to develop a separate plan, not based on the constraints associated with the conformity analysis, called the APS. The value of an APS is two-fold.  First, it provides a framework for local communities to still consider how emissions can be reduced (by strategy or investment) beyond the scope of their RTP without mucking up the air conformity analysis. Second, it provides ARB with important feedback about the level of investment necessary to achieve the ambitious emissions target.

Now we return to the issue of why it is a mistake to require an accepted SCS (and exclude an accepted APS) as an eligibility threshold. Here, SB 375 provides direct guidance: an accepted APS enjoys equivalent access to CEQA streamlining privileges as an approved SCS. Both are adopted plans that are accepted by the ARB.  And both provide a pathway to achieve the target. The SCS is the path in a region with adequate resources and the APS is the path in a region with inadequate resources.  But in the case of an accepted APS, CEQA streamlining encourages local agencies and developers to make improvements to the underlying land uses that go beyond the assumptions in their conformity analysis.

The same analysis works for funding projects that are included in an APS.  Projects that go beyond the fiscal constraints of the RTP should be eligible for new funding regardless of whether they are in an SCS or APS accepted by ARB. It’s usually the case that less-resourced regions have a more limited set of policy and investment options. A state policy that denies these areas access to funding sources because of the very lack of feasible policy and investment options is circular in the worst way.

Think about that. By conditioning access to certain funding sources on having an approved SCS, we deny funding to the regions that need it the most. The poor get poorer. That is unfair — particularly to those disadvantaged communities within those areas.

In short, SB 375 equates an accepted APS with an accepted SCS for the use of CEQA streamlining for local planning and development projects. The same equation works for funding. Both the SCS and the APS are a path to get to the state’s overall climate goal in SB 32. The only difference is the extent to which the region has the resources and conditions to achieve the ARB-set target.

Fortunately, all 18 MPOs have submitted an SCS to ARB for review (one is still being reviewed). But this issue could be an issue for some regions in the foreseeable future.  Given the enormity of the goal that is ahead of us, state policy should be designed to fund any well-reasoned, ARB-accepted plan that moves the state toward its climate goal, be it SCS or APS.