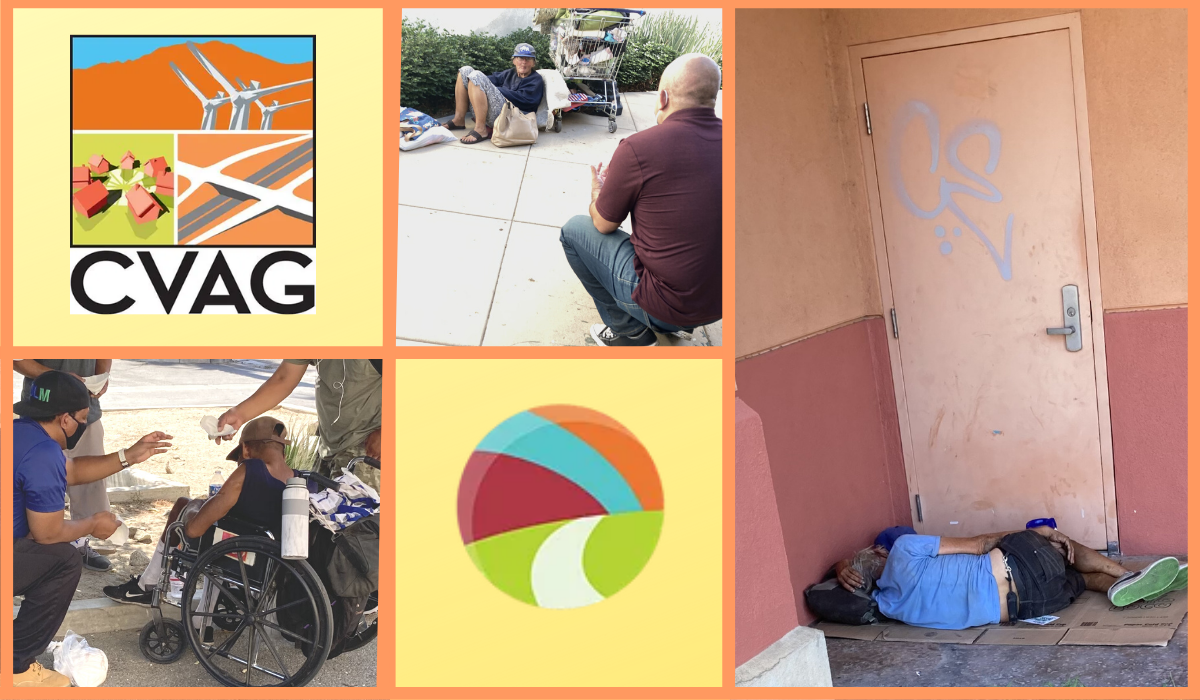 A 63-year-old woman who’s lived on the streets for six years battling chronic health issues is connected with a caseworker, a doctor and ultimately finds a home in a senior living apartment.

A man who became homeless after a family dispute is connected to social services, reunites with his daughter and finds stable housing.

An older couple caught in a cycle of homelessness, unaware of available programs, is moved into a short-term apartment, qualifies for benefits and secures a voucher for Section 8 housing.

The program, launched in 2017, pools resources from some of the region’s 10 cities, three tribal nations and the County of Riverside to get people off the streets and into housing. The goal is to compliment, not duplicate, services offered elsewhere.

To the maximize impact, the CV Housing First program is undertaking a major shift that represents CVAG’s own commitment to ending homelessness: rather than hiring a contractor for homeless services, as the program has done since its inception, CVAG is bringing the program in-house and hiring CVAG staff to conduct outreach and case management.

History of Attention to Homelessness

CVAG’s homelessness programs began in the early 2000s, prompted by growing frustration among local elected officials that the Coachella Valley wasn’t getting enough attention to the issue from the county.

The work began with a food distribution program that engaged local churches. Momentum built, and local leaders decided to launch their own emergency, overnight shelter in north Palm Springs. The shelter helped thousands of people, but with contributions varying year to year, depending on other budget demands faced by cities, CVAG couldn’t expand the shelter to offer a full range of services and, eventually, available beds were reduced.

In 2016, CVAG worked with Riverside County to transition the facility into a much-needed long-term mental health facility. And CVAG began to brainstorm new approaches to addressing homelessness, understanding there is no “one size fits all” approach. That lead to the creation of Coachella Valley Housing First in 2017, based on the philosophy is that once someone has a stable housing situation, they can then focus attention on issues like maintaining employment, and addressing addiction or mental health issues.

CV Housing First includes services like rapid re-housing and crisis stabilization units, which are apartments rented under the contractor’s name that allow CVAG to get someone under a roof almost immediately.

To fund the efforts, CVAG’s member cities are asked to contribute a $100,000 a year. Those contributions have been matched dollar-for-dollar by the Desert Healthcare District/ Foundation, a special district whose Board of Directors has publicly recognized the nexus between addressing mental health issues and addressing homelessness. CVAG now has participation from eight of the nine Coachella Valley cities, in addition to the County of Riverside and the Agua Caliente Band of Cahuilla Indians.

An independent analysis by the Health Assessment and Research for Communities (HARC, Inc.) was conducted on the first full year of operations. Between July 1, 2017 and June 30, 2018 CV Housing First served 401 clients – and more than eight out of every 10 people exited the program to permanent housing. Another 11 percent went to temporary housing.  HARC also found that clients’ average monthly income more than doubled from $629 to $1,496.

In October, The Desert Sun released its own analysis of the time it takes to move voucher-eligible people into a new home in Riverside County. The newspaper’s reporting showed it can take programs up to 118 days to get someone under a roof. CVAG’s program had by far the most successful turnaround at a mere three days.

As CVAG brings the homelessness program in-house, it will hire staff to conduct outreach and case management, working closely with local law enforcement and hospital staff to identify the homeless residents who have become the “frequent flyers” of social services.  The approach will give CVAG the ability to staff and operate the program in a way that meets the high level of service the Coachella Valley deserves and expects, the ability to hold program staff accountable for performance, and the flexibility to adjust as needed. It will also give CVAG the ability to cultivate and deliver the positive inter-agency partnerships that are the hallmark of a strong and cost-effective regional homelessness response system, as well as help boost the local pool of experienced homeless services workers.