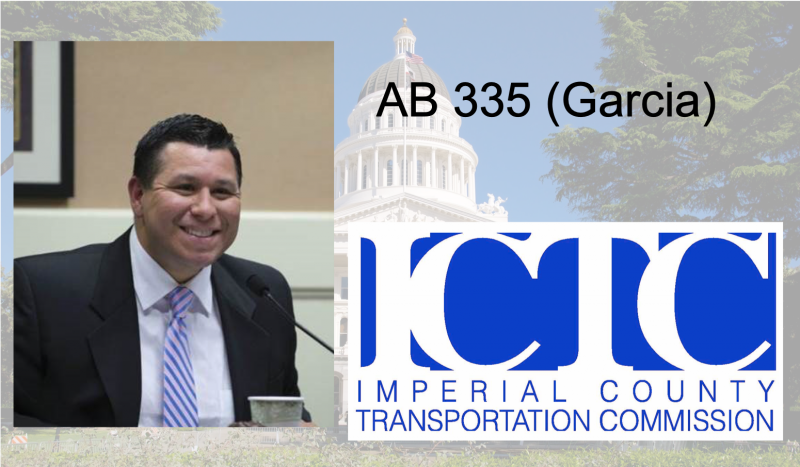 One new law that we are particularly pleased with this year is AB 335 (Garcia).

For most observers, the bill was a sleeper.  The author’s summary stated that it “expands the duties of the Imperial County Transportation Commission (ICTC), a state-created entity, to include non-transportation or “council of government like” activities approved by local members to serve the needs of Imperial County.”

ICTC is one of many state-created county transportation commissions (many of which are also CALCOG members — see California Public Utility Code sections 132800 – 132824). These statutes authorize ICTC to serve as the regional transportation and regional transit agencies and to administrate the county’s local sales tax program for local roads, state highway, and transit projects.

The ICTC’s member agencies wanted more. As an entity created by state, ICTC could do nothing more than what was authorized in state statute.  But the cities and county wanted to use the trust and experience they developed with ICTC to improve the services of other programs.

In other words, ICTC needed authority to act as a council of governments. A “COG” is a joint powers authority formed by a group of public agencies that have powers in common. For example, if two cities, a county, and a special district all have a responsibility to provide fire services, they can join under a joint powers agreement to have one unified department, thereby increasing staff efficiencies and providing opportunities to improve service levels.

The voluntary “bottoms up” structure of the joint powers model is very powerful because it respects local authority and assures regional flexibility.

That is what ICTC needed. But it faced some hurdles. The first was that ICTC was created by state statute, and thus it could not expand its scope of operations without amending that statute. Of course, they could have gotten around this by creating separate joint powers authority with the same members and incorporate ICTC staffing through contracting arrangements, but that seemed confusing for the public and challenging to implement. The second hurdle was the ICTC Board included a representative from the Imperial Irrigation District – a local agency that shared some, but not all of the duties of all of the other members (cities and the county).  Thus, if the IID were to remain a member, the scope of authority that all the members shared in common would limit what the entity could do.

As a result, the local agencies in Imperial County may now voluntarily add program responsibilities to ICTC as the needs of the county see fit. Given that ICTC is a trusted agency among local, state and federal agencies and stakeholders, it is a natural place to work cooperatively within the county.  AB 335 will allow the member communities to leverage the trust that ICTC has already established to address additional regional needs.

So how does ICTC plan to apply this new responsibility?

Here are two programs that will serve as a start:

Looking forward, the local agencies of ICTC may want to work cooperatively for other programs. Animal control and emergency communications are two other areas of interest.

While the circumstances in Imperial County are unique, the value of an effective regional government is understood state-wide. Effective regional governance is essential to the operation of cities and counties across the state. Sometimes, this collaboration generates an innovative program that improves services and opportunity to the communities of the region. Other times, governments combine resources to achieve economies of scale and efficiencies that save taxpayer dollars. In all instances, the level of communication and cooperation is improved to the benefit of residents throughout the region.