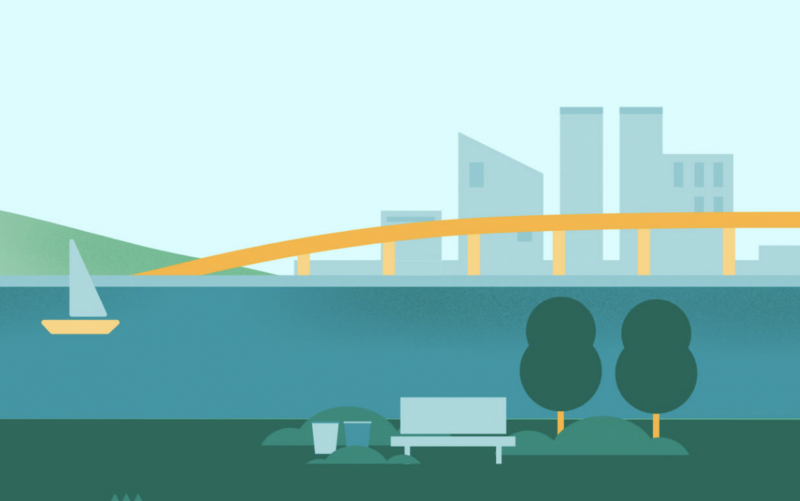 Do you have what it takes to be Mayor?

It’s a perennial challenge to get meaningful public input, especially across a big, diverse region. So going digital with an online planning game was a welcome experiment for staff at the nine-county Metropolitan Transportation Commission and Association of Bay Area Governments (MTC/ABAG).

The effort is called Mayor of Bayville, and it may be the first of its kind in the nation.

The game uses colorful graphics and a sense of humor to put players in a position of power. Players pretend they are leading a fictional city, listening to constituents and making tough choices about where to spend money.

The game helps illustrate the trade-offs involved in updating Bay Area 2050, the region’s 30-year plan for transportation, housing, the economy, and the environment.  Mayor of Bayville supplemented traditional outreach and significantly increased the numbers of people weighing in on MTC/ABAG investments, said planner Raleigh McCoy.

“We wanted to go beyond what was required and digital engagement seemed like a good place to start,” said McCoy, who leveraged Snapchat, Instagram, Facebook, and other platforms to publicize the game.

The Mayor of Bayville complements traditional public workshops required of all COGs and MPOs under SB 375. The game was timed to run simultaneously with 35 in-person “pop-up” booths staffed by MTC/ABAG at such locations as farmer’s markets, libraries, and schools.

Three thousand people played the game, participating from all nine of MTC/ABAG’s counties and 84 of its 101 cities, McCoy said. To ensure one passionate citizen didn’t submit multiple responses, the staff was able to match IP addresses to user responses. To maximize accessibility, the game can be played in three different languages. Players do not have to provide any information, such as names or addresses, though ZIP codes may be given voluntarily.

The results pleased MTC/ABAG — and surprised Wendy Fong, who helped design the game as part of the San Francisco-based digital agency Exygy.

“Of all of our products, it’s one of our most popular,” Fong said. “A civic game about transportation, housing, the environment and the economy? That’s awesome.”

So You Want to Be Mayor?

With the Mayor of Bayville, players step into the shoes of life as a mayor.

As “mayor,” players hear from fellow commuters, shop-owners, advocates, and other constituents who have plentiful opinions about what needs fixing and how. With a limited budget, players must then make investments within four separate areas that undergird MTC/ABAG’s long-range transportation plan: housing, transportation, economic development, and the environment.

Inspired by other financially constrained trade-off games such as this one on the federal budget from the New York Times, the Mayor of Bayville is what McCoy calls an “experiential walkthrough” that lays out the costs and forecasted outcomes of different policy approaches.

For example, to tackle congestion, players are given options such as investing in more bike-pedestrian access, increasing fees on vehicles during peak travel times or investing in bus rapid transit. When clicking on each option, players are taken to a simple explanation of the pros and cons of each policy solution, along with any key fiscal information to consider (for example, that making transit free for low-income residents will result in a large loss for transit agencies, and that imposing time-of-day fees on vehicles to even out traffic will impact lower-income households).

When developing Mayor of Bayville, staff recognized that while policy geeks tend to think across many policy arenas, the average person is more readily drawn to a single area – such as parks in their community, or the price of housing. Thus, the game is designed so that players can delve separately into housing, transportation, the environment, or economic development – or they can select strategies in all areas. On average, players made about three strategy choices each in the game, with the overwhelming majority being strategies in the housing and transportation sections. McCoy attributes that to the fact that most people associate housing and transportation with MTC/ABAG, which only has expanded Plan Bay Area to include policies related to economic and environmental realms.

MTC spent just under $200,000 to develop the game with Exygy, McCoy said. From idea to launch was about six months. The game remains live on MTC/ABAG’s website, where residents can play it and offer comments to MTC/ABAG staff. (Anyone playing the game through mid-December, 2019 was part of the official comment period for the long-range plan).

“We wanted a fun and engaging tool that speaks to the everyday person on the street,” said Exygy’s Fong. She said the game’s goal was as “to make democracy more accessible,” without the formality that often attends public hearings and government chambers.

While many MPOs or COGs may not have the resources to create a digital game, MTC/ABAG’s McCoy suggests some form of online engagement is worth trying.

“Even lighter touch digital experiences – like online surveys, which are free or low cost, or social media – offer a wide variety of possibilities for engaging people,” McCoy said.

Do You Have What it Takes to Be Mayor?

And make your choices!