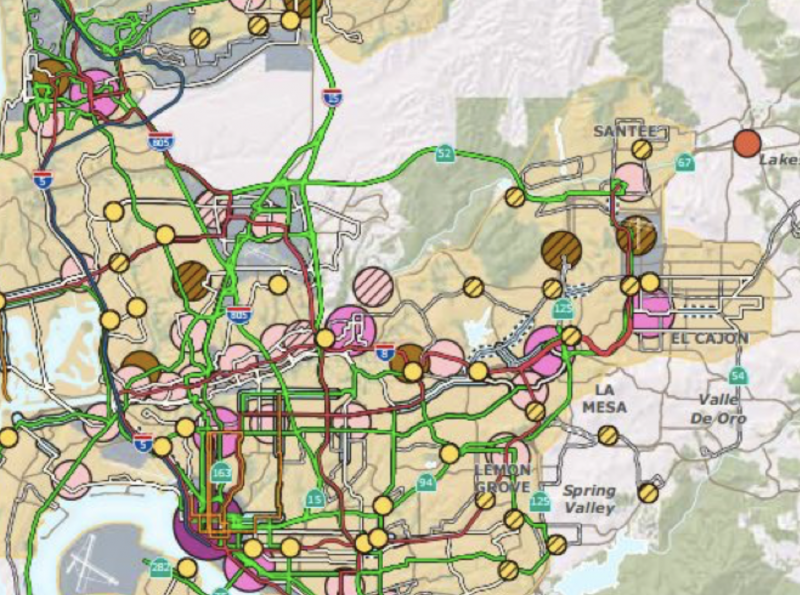 Mostly Infill with a Chance of Sprawl

Most people pack an umbrella when they know that rain is in the forecast.

Instead, the land use forecast in a regional plan is used to help direct transportation investments in a way that will serve the future needs of the region. It informs the financial decision, but it does not regulate. In contrast, a land-use element in a general plan actually controls what zoning can be adopted or what kind of project can be approved.

The introduction of the Sustainable Communities Strategy (SCS) into the RTP did not change this basic construct. For example, if the forecasted development pattern (based on the economy, demographic trends, and local policies) calls for increased housing in transit corridors (which all RTPs do), then the region could get credit for the corresponding GHG emission reductions under their SCS (but see our modeler’s note below). The amount of reduction taken is based on academic research and data that quantifies the reduction.

Of course, as any weather expert knows, it’s difficult to predict the future. Any plan adopted prior to 2010 was unlikely to predict travel options (like Uber, LYFT, or even scooters) that were enabled by smartphones. Similarly, today it’s difficult to know what the effect will be of autonomous vehicles or a fully electric fleet of cars.

As a result, the assumptions in an RTP are a lot like a weather forecast, except that the RTP forecast period is twenty years or more instead of just one to seven days. This extended timeframe creates significant uncertainties in the outer years of the plan, which is part of the reason why federal law requires an RTP to be updated every four or five years. This frequency keeps the underlying planning assumptions as current as possible.

The linkage between land use type and travel choice is well-established. Perhaps the good news is that California’s Metropolitan Planning Organizations are forecasting more infill than ever before. These forecasts are built on thousands of hours of outreach to local jurisdictions and stakeholders to identify community-based visions for growth and revitalization. This grounding assures that the future physical environment (upon which billions of investments will be made) is a “reasonable” assumption (forecast).

Locating more housing units in infill areas near mobility options is one of the most significant GHG emissions reduction strategies. But these are only forecasted projections (albeit based on some pretty good data). The chance remains that “sprawl” development may outperform the forecast. Thus, it is incumbent on all regional stakeholders to stay engaged at the regional and local level to assure that the RTP’s vision for growth and transportation continues to reflect the state, regional, and local goals.

In other words, expect infill; but keep an umbrella handy.

Important Disclaimer from a Transportation Modeler:

Our purpose here was to explain the role of the land use “forecast” within the RTP. But a projected physical environment (land use in terms of general use and density) only partially influences consumer transportation choice. The cost of driving, reductions in congestion, more accessibility to transit, and other factors not mentioned in this article. These other factors—and the cost of driving in particular—are often the dominant factor in transportation choice. In other words, people living in well-located, multi-family units are still likely to drive a lot if the cost of car ownership is small.