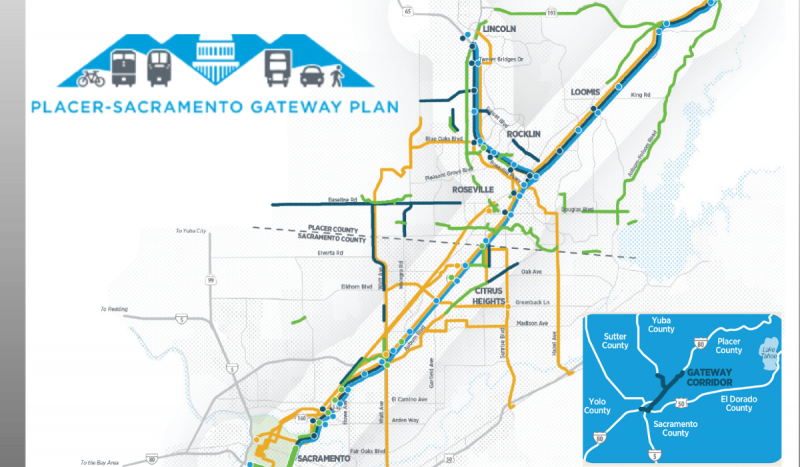 Congestion in the Sacramento area ranked 19th worst in the nation earlier this year.

Looked at one way, it’s a sign of success: The region’s economy is expanding, with an increase in jobs and a jump in population (even more pronounced now with the Bay Area’s pandemic exodus).

Yet as any economic development expert will tell you, congestion left unmanaged can smother growth. The trick? Developing a coordinated transportation system that distributes the pathways, and modes, taken by people and goods crisscrossing the region each day.

That coordination is the goal a new mobility blueprint that’s the first of its kind in California.

The Placer-Sacramento Gateway Plan identifies bike paths, transit and highway projects along four of the region’s busiest corridors to improve safety, lessen delays, lower carbon emissions and reduce vehicle miles traveled. The plan focuses on segments of I-80, Business 80, and Highways 50 and 65, while also looking at parallel bikeways, transit lines and roads within two miles of the corridors. It covers fourteen jurisdictions, four transit agencies and a multitude of transportation facilities.

“We have never done this before, where we’ve actually worked together on projects,” said Mike Luken, executive director of the Placer County Transportation Planning Agency (PCTPA), referring to the analysis and planning undertaken for the Gateway Plan, which identified nearly 150 multimodal transportation improvement projects along the study corridors.

The Gateway Plan was spurred by the promise of financial help. Specifically – the desire to be competitive for the California Transportation Commission’s Solutions for Congested Corridors (SCCP) grant program. Now in its second cycle and funded through the SB1 gas tax, the SCCP program offers grants for everything from bike trails to local road and highway projects to buses and light rail – as long as they are part of a coordinated, corridor-wide approach to decreasing vehicle miles traveled (VMT) and greenhouse gas emissions (GHG), as well as reducing congestion delays and collisions.

It’s the first state level grant program to require such coordination; its corridor emphasis means jurisdictions and agencies have a new incentive to rise above their silos and jointly strategize.

“There are a lot of obstacles to making our system connect well,” said Luken. Lack of coordination across geographic and agency lines is one the biggest. As the lead author of the Gateway Plan, Luken’s agency undertook significant public outreach throughout the region, uncovering many real-life consequences of uncoordinated mobility, such as:

To create the Gateway Plan, which includes 150 projects, the PCPTA coordinated with three key partners: Caltrans District 3, the Capitol Corridor Joint Powers Authority (CCJPA) and the Sacramento Area Council of Governments (SACOG). Together, they pooled resources and hired a consulting team to model corridor-wide projects to determine which could best help reduce delays, accidents, VMT and GHG.

The jurisdictions involved included Auburn, Loomis, Lincoln, Rocklin, Roseville, Citrus Heights, and Sacramento; they worked together to narrow the comprehensive list to just eight priority projects (see list below) that comprise the SCCP grant. The price tag for the eight priority projects alone is $142 million, with $65 million sought from the SCCP program and the balance ($77 million) coming from local funding, Luken said.

As for the rest of the projects outlined in the Gateway Plan, team members will continue to meet regularly to determine priorities for further funding rounds and to get projects construction-ready, Luken said. The Gateway Plan’s goals will also be rolled into the upcoming Placer-Sacramento Action Plan, which will identify the next set of priority projects for upcoming rounds of the SCCP grant program.

One of the most significant aspects of the Gateway Plan was public outreach.

“When you look at Placer, it’s a different demographic than when you start moving into the I-80 corridor going into Sacramento,” Cornell said. “It was a definite challenge to make the outreach they wanted to see happen.”

Cornell’s firm reached roughly 5,000 people over six months through a creative combination of approaches. In addition to online feedback and community meetings, they relied on pop-up sites at farmer’s markets, transit stations, food banks, community fairs and recreation events, supermarkets and malls. Cornell’s team brought face-painting, Connect 4 and other games to attract passersby and their kids. They engaged people in conversations about the barriers people experience as they try to get their children to school, or go to work, or as they run errands.

Online surveys worked well to solicit input on relatively straightforward questions about congested corridors, Cornell said. But more involved, one-on-one feedback was the best way to garner input on other options, whether they include transit, biking, walking or shared use mobility.

In disadvantaged communities, a common theme arose: “They really need more options for getting around,” said Nicole Porter of Aim Consulting. “The majority said transit doesn’t get them exactly where they need to go. If light rail or buses are late, they will be late, and that’s not helpful when you’re punching a time card or picking up children.”

The information gathered from Aim Consulting was brought back to the Gateway Plan team and knit into a larger framework of mobility options.