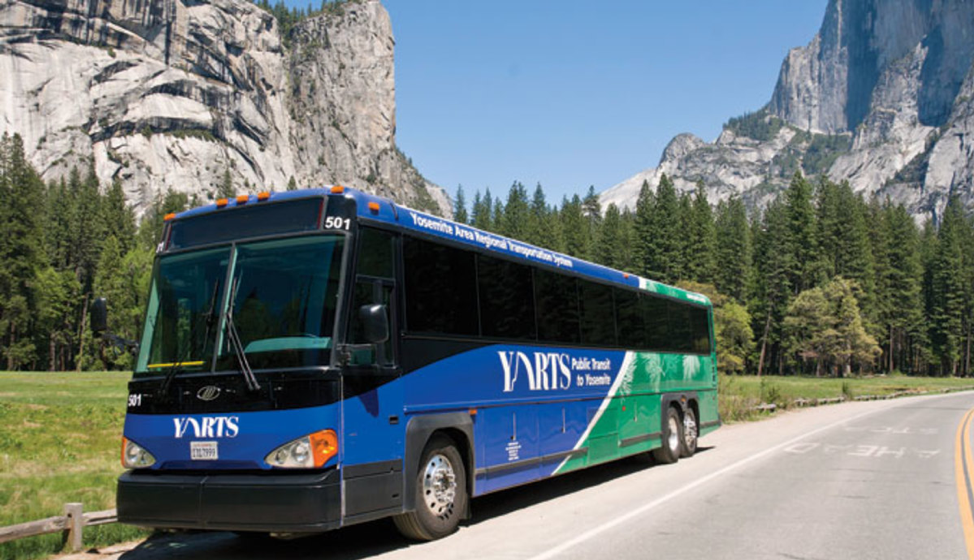 On a typical summer day in Yosemite, you can take in the majestic views of Half Dome and El Capitan–while you struggle to find a place to park your car.

More than 90 percent of Yosemite’s 4 million annual visitors arrive by car. To get there, drivers must navigate narrow, winding roads for more than an hour (often behind that RV that just won’t pull over). Once in the park, almost all of the drivers head straight for the valley, where they encounter city-like traffic congestion and their own simmering frustrations.

Fortunately, there is an alternative. The Yosemite Area Regional Transit System (YARTS), a joint powers authority is that is managed and operated by the Merced County Association of Governments (the JPA is between Merced, Mono, and Mariposa Counties). These communities realized that they had an economic interest visitors enjoying their experience, which was recently backed up by a National Park Service (NPS) report (2018) that shows that visitors spent nearly $500 billion and created more than 6000 jobs in the communities surrounding the park.  As a result, the Joint Powers Authority was formed to improve the transit accessibility between the park and its neighboring community.

Today, the Park encourages visitors to take YARTS. Not only does it reduce some of the congestion, but fewer cars also improves the air quality in Yosemite Valley, which can make viewing Half Dome and El Capitan a little hazy. YARTS now provides regularly scheduled public transit service into Yosemite National Park and the gateway communities. YARTS provides service to park visitors and employees on Highway 140 through Mariposa County year round, traveling between Merced and Yosemite Valley. During the summer, service is also provided on Highway 120 between Mono County destinations and Yosemite Valley through Tuolumne Meadows and between Sonora and Yosemite Valley through Groveland. Gear such as bicycles and hiking equipment can be brought on any YARTS bus.

And its a good deal for the riders. All entrance fees into the park are included in the bus fare. Once in Yosemite Valley and Tuolumne Meadows, visitors can use the free in-park hybrid shuttle buses (that run on 10-minute headways in Yosemite Valley) that provide transportation to most of the popular destinations. And it seems to be working.  But don’t take our word for it, read the travel reviews that emphasize the friendly, safe bus drivers who take the time to answer questions about Yosemite and California history.

In 2015, Fresno Council of Governments started funding YARTS to run the service from Fresno along State Route 41 (using CMAQ, federal transit funding, firebox, and other funding sources). Three buses per day run seasonally from May 15th– September 15th. The route begins at the Fresno Airport, connects to the Amtrak/Greyhound station, and then heads north with a few more key stops before entering the park. A round-trip ticket from Fresno, which includes the entrance fee to the Park, is only $30 (and $20 for seniors, people with disabilities, and children).  Tickets can be purchased on-line or from the driver.

To date, the majority of Californians who use the YARTS come from the San Joaquin Valley and Southern California. (What say you, Bay Area?). And under a recent promotion, visitors who have flown United Airlines into Fresno or Mammoth Lakes can show their boarding pass to ride free.

So there is no excuse now.  Use YARTS to get in and out of Yosemite Park and then hop on the frequent shuttles to get around the Park.  It is easier to enjoy Yosemite if you are not worried about your car.

And from our vantage point, this is a great example of inter-agency, inter-regional partnership. The result is to encourage more transit ridership, that can reduce emissions and TMT (tourist miles traveled), which are often more difficult for transportation models to quantify.

For more information got to https://yarts.com/