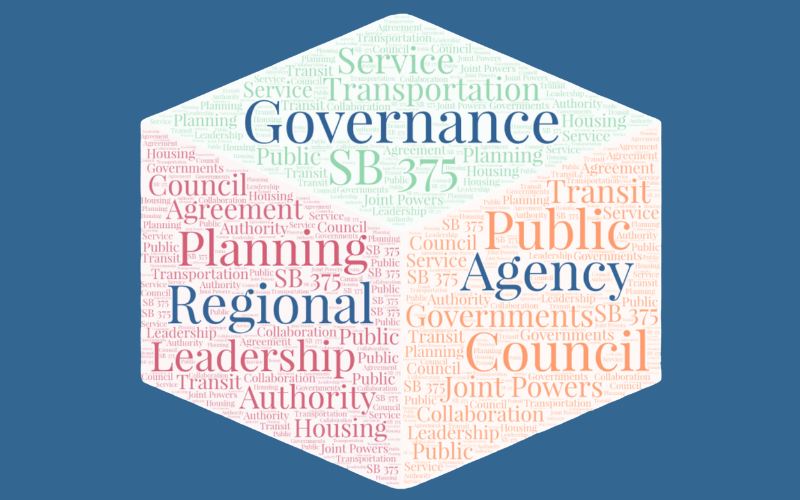 We admit it. Regional governance often defies easy classification. Various agencies have grown and adapted to best serve their local communities.  The role of each agency also influences its structure.  As a result, there are instances where two agencies with different structures undertake the same mandate. Likewise, two regions that share the same structure may perform different services.

So how do you know what’s what?

First, a common point is that all regional agencies are governed by local elected officials.   Then its a matter of asking two questions: How was the agency formed? And what function does the agency serve?  Understanding both of these variables will help you know what’s what when it comes to your regional governance in your region.

Is the agency created by state statute or local agreement?

All CALCOG members were either formed by state statute or the result of cities and counties forming a joint powers authority (JPA).

If a regional entity is created by statute, its powers are limited to the duties described in the statute. Nothing more. If the statute says that the agency may issue bonds, then it may. But without specific authorization, it may not.  The authorizing legislation also describes the specific make-up of the legislative body, what activities it can engage in, and other elements needed to create a legal entity.

If the regional entity is created by JPA, its powers can be much broader. (Or more limited, depending on what the forming agencies agreed upon).  State statute defines the formation process.  See Government Code § 6500.  A JPA allows two or more public agencies (including state and federal agencies) to collectively undertake any action in which they could independently undertake on their own.  But they must share the power in common.

A council of governments (COG) is really a general-purpose JPA.  Its authority can be very broad because all of the joining cities and counties commonly share the “police power” to protect public health, safety, and welfare.  But local agencies may elect to limit the authority.  For example, the Mendocino Council of Governments (MCOG) was formed to accomplish limited duties.  Then the legislature appropriated funds to regions to implement housing planning programs.  See How Regional Housing Helps Build Housing.  Because the MCOG’s original JPA agreement did not include this in the original scope, the cities and county had to amend the JPA before MCOG could accept the state funds on behalf of the region.

Finally, it’s worth noting that not all JPAs are regional.  Many are formed for narrow, specific purposes.  For example, JPAs are commonly used to form joint insurance and risk management programs.  See the California Joint Powers Association membership roster.

What is the Agency’s Role (or Roles)?

CALCOG members group into five functional categories.  The classifications are not exclusive. One agency may serve as more than one of the roles defined below.  For example, the Merced County Association of Governments serves as the MPO, RTPA, operates transit (YARTs), and serves as a forum for general-purpose local agency cooperation. Visit our Member Directory to see a full profile listing of members by type.

The recent change to the structure of the Imperial County Transportation Commission illustrates the nuances of regional governance.  ICTC was originalaly created by statute. See Public Utilities Code § 132800. Thus, it’s duties were limited to transportation planning and programming.

But there was interest in converting to a COG structure.  ICTC faced two challenges.  First, the statute granted only limited authority.  Second, the inclusion of the Imperial Irrigation District in ICTC’s membership constrained the scope of potential JPA authority because its authority was limited to porviding water.  The district did not share all the powers that the JPA would need to undertake the desired scope of work.

To solve the problem,  ICTC sought legislation to amend its formation statute to authorize it to act on a broader set of duties while retaining its current board structure (including the irrigation district).  The result was AB 335 (Garcia), which expanded ICTC’s statutory authority to serve its communities in much the same way as COG does under a JPA.  In essence, it’s a state-formed council of governments.