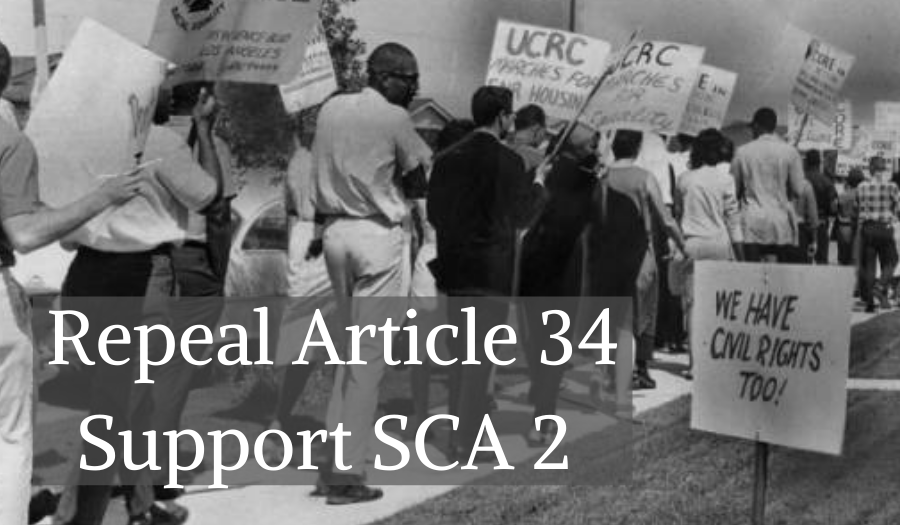 Its technically illegal to build a publicly-funded low-income rental housing project in California unless it has been approved under a referendum that has been submitted to the voters of the city in which the project is located.

It’s right there in Article 34 of the California Constitution. How can that be? Affordable housing projects get built all the time (or at least some of the time) without being placed on a ballot, right?

To answer that question we have to go back to 1950 when Article 34 was approved by voters as Proposition 10.  Opponents tried challenging it in court on Equal Protection grounds.  But it was upheld by the United States Supreme Count in James v. Valtierra, 402 US 137 (1971).  The  Court  dismissed an Equal Protection challenge.  The Court found that the requirement to hold a referendum was in itself not discriminatory because referenda could also be required for other types of projects, not just low-income housing projects.

It was not the US Supreme Court’s best day.

So the law stands.  Which brings to why our elections do not have a referenda on a ballot when a project does get built.  The answer lies in the fact that the original Proposition 10 did not define the term “low-income rental project.”  Thus, the Legislature had to define the term.  The statute defines the term to mean a project where at least 49% of the projects will be affordable.  See California Health & Safety Code § 37000.   This means that when public funding is made available to an affordable housing project, the developer is only required to assure that slightly less than half of the projects are affordable.

But most projects do not rely solely on public funding. They incorporate funding from a number of sources.  Affordable housing developers typically elect to offer all of the units at affordable rates even though they are only required to rent about half that way.

While the nonprofit developer workaround allows affordable housing projects to house a greater number of low-income households, it’s not without its costs.  Basic compliance with Article 34 can cost affordable housing developers between $10,000 and $80,000, and can add as much as 15% to the cost of building each unit.

But let’s not lose sight of the fact that it is flat out discriminatory.

“Article 34 stands as an additional, anachronistic and expensive Constitutional barrier,” said Senator Ben Allen, “that subjects local governments to a web of regulations and costly elections that end up driving up the price of building publicly financed affordable housing.”  Fortunately, he is doing something about it.  He authored SCA 2, which places an initiative on the state ballot to repeal Article 34.  (It must be repealed by initiative because it was adopted by an initiative).

This is the second time the Senator has proposed this constitutional amendment.  Last legislative session he introduced the same bill as SCA 1, but it did not pass both houses in order to get on the ballot.

“Article 34 is a scar on the California Constitution.  It’s designed to keep people of color and poor people out of certain neighborhoods.  And it needs to be repealed,” said Housing Committee Chairman Senator Wiener when he co-authored SCA 1 last session. “Publicly owned affordable housing for low-income people is critical to reducing homelessness and ensuring that housing is available to people of all income levels. This important source of housing shouldn’t be singled out for voter approval when other types of housing aren’t.”

Based on CALCOG’s support for SCA 1 last year, we will be supporting SCA 2.  There is no place where we should harbor discrimination and segregation, and particularly so in our state constitution.