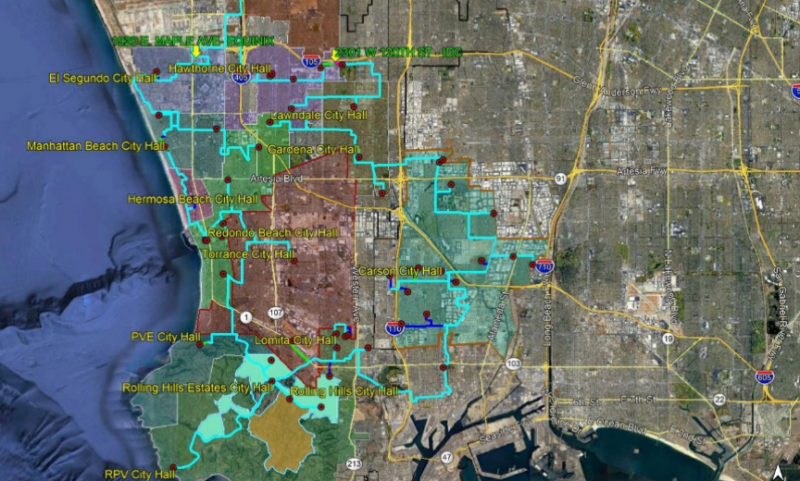 Councils of governments can combine the authority and purchasing power of their members to deliver better service.  The South Bay Cities Council of Governments (SBCCOG) effort to create a regional broadband network is a textbook example.  And the COG’s member cities will save money and get better service.

The project will create a “ring of dark fiber” around the South Bay. (Dark fiber is dedicated and unmetered connectivity that provides nearly unlimited bandwidth options). The system will provide high-speed connectivity for carrier-grade internet service. A ring architecture protects the core network that automatically re-routes traffic in the event of a disruption. Bandwidth availability starts with 1 gigabit (Gb) and will scale to 10 Gb (and even higher speeds as members require). The system will also have two diverse internet “points of presence” (“POP”) at world-class data-centers in El Segundo and Hawthorne.

The result will be that cities will be paying less for more service.  The cities will pay about $1000 per month for aminimum of 1 gigabit of service.  The price will descrease as more services are linked to the system. Service (at slightly higher rates) will also be available for 2, 5, and 10 gigabits.  To compare: A SBCCOG survey found that cities were currently paying an average of $3,627 per month for internet speeds well under one gigabit.

Put another way, cities will be able to access 10-gigabit levels of data for less than what they are currently paying for less than 1 gigabit.

Perhaps the biggest challenge SBCCOG faced was how to pay for the initial capital costs. The original concept was to provide general municipal services that would include, among many other things, support for transportation systems management. However, the only funding that was available was LA Metro’s Measure M account, which set aside funding for each subregion in the Los Angeles County, including the South Bay Area.  But in order to access these funds, the primary purpose of the initial connectivity must be for transportation.  As a result, SBCCOG decided to use the connectivity for transportation purposes first.  Afterward, SBCCOG can also use any additional capacity, to the extent its available, for other public and economic development uses.

SBCCOG submitted a $4.4 million funding request to set up the network that would be required for real-time traffic management, a range of road sensors, and enhanced signal synchronization between cities. In addition, the fiber would also support infrastructure and applications related to connected and autonomous vehicles. Ultimately, the funds could also explore connectivity that would support “trips not taken” encouraging telecommuting, telemedicine, distance education, and digital delivery of municipal services. In September, the LA Metro board approved the funds as part of a set of infrastructure improvements for the South Bay Area.

As the system matures, the benefits will expand to schools, hospitals, businesses, public safety, and emergency management services.  Over time, the city members of SBCCOG may use the additional capacity to improve resiliency for emergency preparedness and data back-up, efficiently use cloud-based software and provide shared software platforms with other public agencies (like GIS tools, online permitting, and regional transportation planning tools).  Additional capacity could also eventually be used for providing free public WIFI.  There is also a tremendous amount of potential for additional commercial and residential access.
Ultimately, the ring of fiber created in the South Bay places South Bay in league with neighboring Silicon Beach, and may ultimately help retain companies that would otherwise leave for other areas with better network infrastructure.

The South Bay Fiber Network should be operational by July 2020.