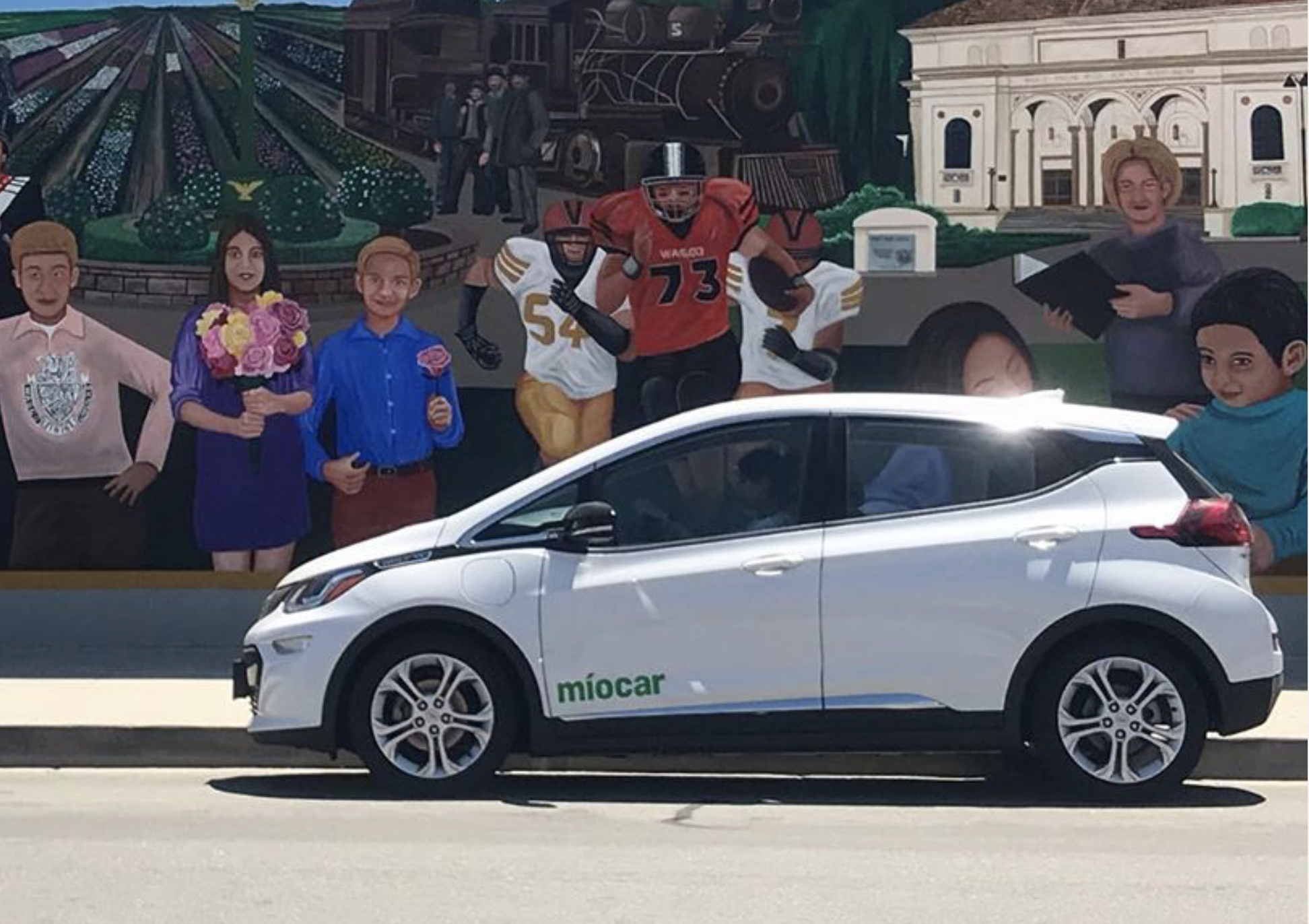 It is almost too good to be true: a rural, all-electric, affordable car sharing service with charging stations strategically placed near low-income households.

That is the idea behind Miocar, a project hatched by mobility researchers at UC Davis and leaders of San Joaquin Valley’s eight Metropolitan Planning Organizations.

Launched in 2019, Miocar paused due to Covid-19 but is now back up and running, offering residents of five affordable housing developments in Tulare and Kern counties a way to avoid the costs car ownership while also reducing greenhouse gas emissions in areas with some of worst air quality in the state.

“It’s very convenient, very user friendly and you can use it with the touch of a phone,” said Tulare County Supervisor Eddie Valero, who rented his own Miocar shortly after it launched and liked the experience. Miocar is located in five communities and two of them — in Dinuba and Orosi — fall in Valero’s northern Tulare County district.

Whether it’s students trying to get to classes, young people starting jobs or families needing to get to the doctor, Valero said there is a critical need in his rural areas for more affordable and eco-friendly mobility options that don’t require car ownership.

While car share isn’t new, electric car share is still not all that common. And having car sharing in rural areas is very unusual because spread-out geographies make the “sharing” aspect a challenge. Part of what makes Miocar feasible is the relatively high densities of the affordable housing communities, all of which are run by Self-Help Enterprises and the Kern Housing Authority.

As a program that is all-electric, rural and affordable, Miocar is the only program of its kind in California, and perhaps the nation.

“We should have it more places,” Valero said of Miocar, citing the medical facilities, schools and work destinations where his constituents need mobility options. “I’m a strong advocate of this program because it’s another transportation option for the Central Valley.”

From BMWs to Chevy Bolts

Miocar was going strong until COVID-19 brought car-sharing – and sharing of nearly any kind – to a halt.

In late August, with some changes in organizational structure and new cleaning protocols, Miocar re-launched.

At a rate of $4 per hour or $35 per day ($45 on weekends), Miocar provides a flexible transportation option where long-distance travel is a constant challenge. So far, the typical user is 44 years old or younger, lives in a household with between 4 to 6 people and has an income of $25,000 to $50,000 per year.  The cars can be accessed via a cell phone, or with a “smart card” that can be issued.

To use a Miocar vehicle, drivers must be at least 21, have a smart phone, a driver’s license, a reasonably good driving record, and pay a $20 membership. In addition to Dinuba and Orosi, the cars are parked at charging stations installed at affordable housing complexes in Visalia, Wasco and Arvin. Residents – and the general public – can reserve and use cars at any hour.

Miocar operates 27 battery electric vehicles (BEVs), including Chevy Bolts, BMW i3s, and Hybrid Chrysler Pacifica minivans. The cars are charged at 17 dual-port EV Charger locations and are serviced by a non-profit organization established to oversee the fleet.  As of January 1, there were about 170 users, with reservation counts doubling about every four weeks.  The typical reservation lasts 8 hours and includes 50 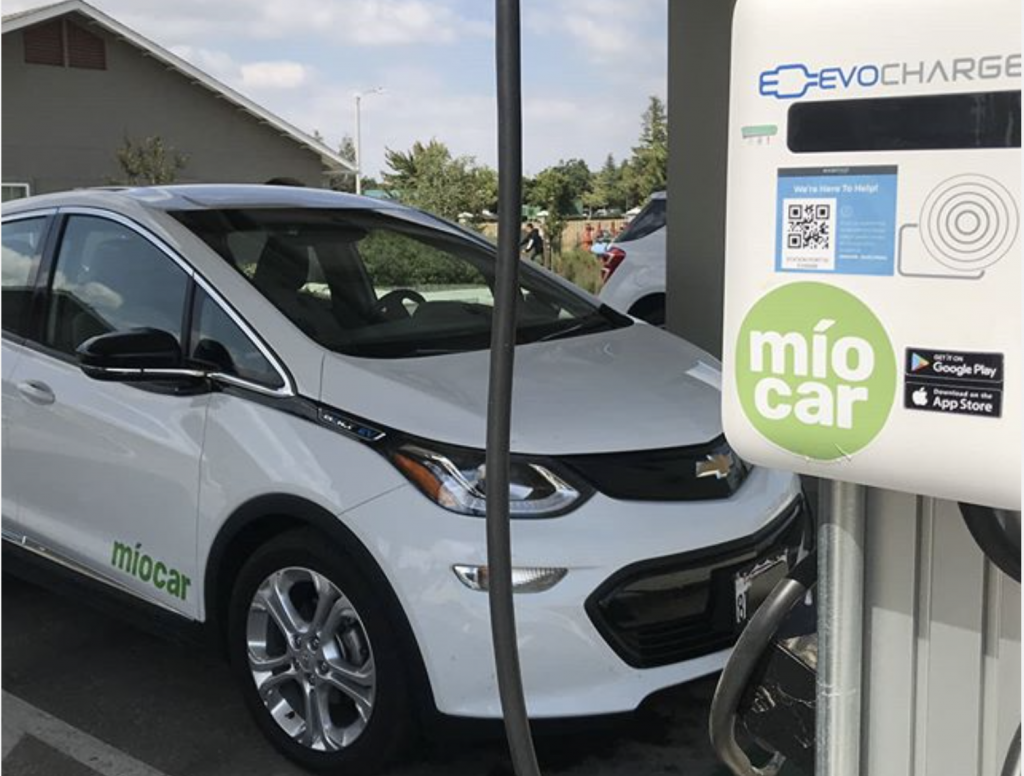 Grew from a UC Davis-MPO Partnership

Miocar grew out of a meeting between the San Joaquin Valley’s eight Metropolitan Planning Organizations (MPOs) and Dan Sperling, who is Director of the UC Davis Institute of Transportation Studies (ITS). (Sperling is also a member of the California Air Resources Board, which is responsible for setting emission reduction targets under SB 375, and the author of Three Revolutions, which details the simultaneous advances in autonomous vehicles, electrification and ride-sharing.)

As they considered affordable mobility options for the Valley, the MPOs began collaborating with others to explore the car share idea.

They submitted a joint planning grant (among the MPOs, UC Davis, transit agencies, and Caltrans) to conduct a feasibility study for electric car-sharing services in rural areas.  After winning the grant, UC Davis’ ITS undertook the study, after which the MPOs selected the concepts and locations where pilot projects would make the most sense. Factors analyzed included potential operating costs, improved mobility, access in rural disadvantaged communities, and potential for scaling.

A subsequent grant application lead to funding from the California Air Resources Board’s California Climate Investments program, which uses cap-and-trade dollars to reduce GHG, especially in economically disadvantaged communities. Miocar was awarded a share of a CCI $2.25 million grant, enabling the purchase of electric cars and installation of electric vehicle charging stations in affordable housing communities. In addition, Dinuba and Orosi, Miocar has locations in Visalia, Lamont, Arvin and Wasco. As continued investments come in, Miocar would like to expand.

The Tulare County Association of Governments (TCAG) and Kern Council of Governmentsre supporting this program to in various ways, including in-kind support and, in the case of TCAG, substantial cash matches. The state funds help pay for charging infrastructure and the purchase and operation of the vehicles. The program is administered by the San Joaquin Valley Air Pollution Control District.

Hiccups Including COVID and funding

While Miocar has been a success in securing riders and offering transportation options to economically disadvantaged residents, the program has had its challenges.

Among them are Covid-19 and a change in the organization overseeing the purchase and maintenance of Miocar vehicles, said Michael Sigala, who helps run the program.

The California Air Resources Board’s Shared Mobility Program gave Miocar a one-year grant to launch, and recently allotted Miocar additional funding to help it through the unexpected pandemic shutdown. While Sigala is grateful for the additional support, he said funding that is limited to 12 months (as it is through CARB’s program) is a challenge for innovative, out-of-the-box programs like Miocar.

On the one hand, Sigala said, CARB is offering “a creative program that is willing to take a chance on things that haven’t been tried.”  But because these innovative grant programs are part of an otherwise staid state government structure, which can be heavy on bureaucracy, the program is not as flexible as it needs to be to foster creativity, he said.

As a start-up that offers subsidized, low-carbon mobility, Sigala said Miocar is exactly the kind of project that the CCI is aiming for, but longer-term investments are needed.