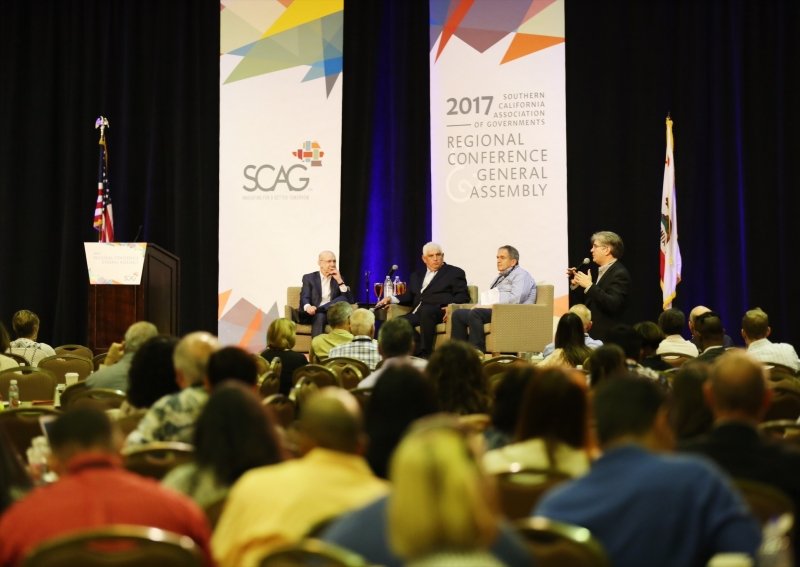 Nobody does a General Assembly quite like the Southern California Association of Governments.

Several councils of governments have General Assemblies as part of their governance structure. These events provide a forum for all members to have input into the work program, approve the budget, and discuss other significant policy items affecting the organization.  But it is also a chance to collaborate to build a region’s capacity to serve.  General Assemblies are most commonly used when the governing body of the COG is less in number than its entire membership.   For SCAG, the governing body (the “Regional Council”) has 86 members for a region of 191 cities and six counties.

In this respect, SCAG succeeds despite what some might claim are long odds. Most of us do not think of the dispersed cities of Needles, Blythe, El Centro, Ventura, Los Angeles, and Mission Viejo as part of the same region, but the General Assembly—just like SCAG’s new logo—wove a common identity by focusing on the interests and issues that are common throughout the region.

You can catch the vibe by watching this 8-minute video that kicked-off the program (with cameo appearances from Lt. Governor Gavin Newsom and Senate President pro tem Kevin De León).

The agenda–with the theme Innovating for a Better Tomorrow–cast an eye toward the present and future – and the near 1,000 or so attendees participated in discussions of housing, technology and jobs, and hope.  There was even an autonomous bus to take a test drive . . . .  er, ride (we survived).  The first day included a keynote about the value and unpredictable benefits of open data, several interesting breakout sessions, networking, sponsor booths, information sharing,  policy discussions, sustainability awards, and an evening of music and well-heeled dancing (except for one guy in an Aloha Shirt who could not keep step with the rhythm—you know who you are).

The highlight was a free-ranging conversation on Friday morning where the issues the region is grappling were highlighted in a remarkably frank discussion.  And while the list of what “to dos” is understandably long, the conversation frequently highlighted SCAG’s role as a strong, supportive regional government. Greg Devereaux, former City Manager of Ontario and CEO of San Bernardino County, challenged attendees to think about how they could use SCAG to solve new problems.  “They are us, we are not ceding authority.  SCAG’s mission is to serve us.” And then Executive Director Hasan Ikhrata doubled down on that sentiment when he said that the cities and counties in the region “must expect an excellent job from SCAG.”

But perhaps it was Alan Wapner (City of Ontario Council Member, SCAG vice president, and CALCOG Board Member) who said it best when he closed the Assembly this way, “This organization is for all of you.  Use its services.  It is up to all of us to make this a better region.”