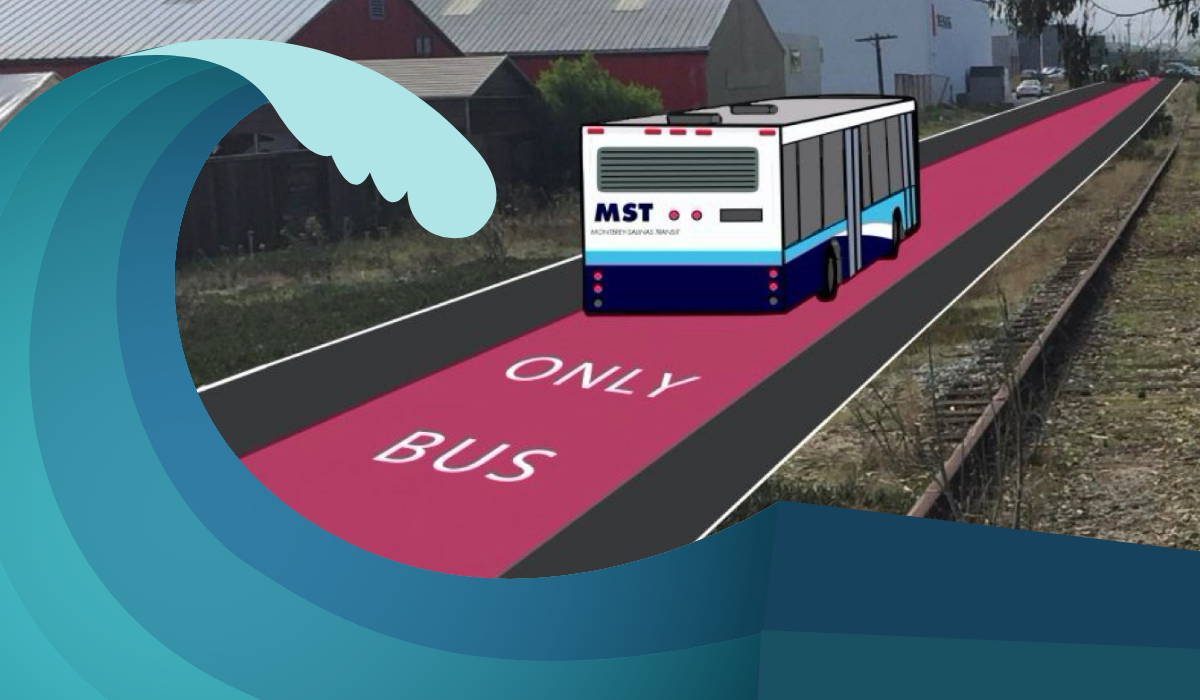 A new bus rapid transit project in Monterey is being planned in an unusual place – along a railway corridor that runs parallel to Highway 1.

Dubbed the SURF!, the proposed busway is part of a regional effort to give buses a boost, lifting them out of bumper-to-bumper traffic so they can run get passengers to their destinations more quickly.

When completed in 2027, the SURF! bus rapid transit, or BRT, will run six miles along the Monterey Branch Line right-of-way, leaving railroad tracks intact for possible future use. Buses will run in their own dedicated lanes with 10- to 15-minute headways, offering relief for the Monterey Peninsula’s influx of commuters in the morning and their exodus in the afternoon.

In addition to providing more reliability and shorter travel times, the SURF! project will lower greenhouse gas emissions. Bike paths and local circulation will be improved, too.

“Our goal is to improve everything we touch,” said Todd Muck, Deputy Executive Director at the Transportation Agency for Monterey County (TAMC). “We don’t want to benefit one mode of transportation at the expense of another.”

In Monterey, that meant taking the opportunity to fill gaps in the Monterey Bay Coastal Recreation Trail, where Muck said circuitous sections will be replaced with more direct pathways for bicyclists.

Residents have the opportunity to weigh in on the amenities they would like to see in the plan until February 19, 2021 and are asked fill out this online survey, in either English or Spanish.

History of the Project

BRT commonly runs along road lanes, medians or even highway shoulders – not on railway rights of way. But for the SURF! project, a confluence of circumstances led to a 100-foot-wide railway right of way being identified as the most efficient option.

TAMC purchased the 13 miles of track making up the Monterey Branch Line  back in 2003 with $9.4 million in Prop 116 bond funds. Built in the late 1800s, the original line ran roughly parallel to California State Route 1, between Castroville and Monterey. While passenger service stopped in the 1970s, the Army used the line to transport materials to Fort Ord until the early 1990s, Muck said.

The initial idea was to install light rail, but federal funding evaporated.

Meantime, as traffic grew worse along Highway 1 in both Santa Cruz and Monterey counties, the focus shifted from light rail to lower-cost options for transit, including BRT. With prompting from the Monterey-Salinas Transit (MST), the Legislature in 2013 passed AB 946, which allowed the region to designate highway shoulders, if feasible, for buses – something the San Diego region had done successfully since 2005.

A subsequent feasibility study looked at placing BRT along highway shoulders and along the Monterey Branch Line. The analysis found that while using the shoulder would work in areas including Santa Cruz County, the railway right-of-way was a better option around the Monterey Peninsula because shoulders along certain Highway 1 bridges are not wide enough to convert to bus lanes.

Local officials brought the idea of BRT in the Highway 1 corridor to the ballot in 2016 as part of Measure X, Monterey’s local transportation sales tax measure (bringing Monterey into the fold of Self Help Counties). The measure’s plan allotted $15 million to create a new rapid bus corridor along Highway 1 between Seaside and Marina. The feasibility study confirmed utilizing the TAMC-owned Monterey Branch Line right-of-way was the best option.

Watch a video of the planned SURF! Route to the sound of surf rock!

A Vision for the Future

The SURF! busway will operate in its own lane, parallel to Highway 1. The railway right of way is 100 feet wide, with tracks in the center, allowing enough room for the dedicated BRT lane and to leave the railroad tracks intact, Muck said. When completed, all transit routes that travel on the corridor will use the busway and avoid getting stuck on Highway 1.

As transit ridership is built up, and if funding and support for regional rail materializes, the Monterey Branch Line could be subsumed into a larger rail network.

The project, which is about 30 percent engineered and designed, will cost $52 million. In addition to the $15 million identified from Measure X, potential future sources of funds include the state’s Transit and Intercity Rail Capital Program (TIRCP) for $25 million, and US DOT’s Capital Investment Grant program for $26 million.

The first two segments of the SURF! project will offer a smooth connection between the Marina Transit Exchange and the Sand City Transit Center/Edgewater Exchange, paralleling Highway 1 within the Monterey Branch Line’s right-of-way. Eventually, going further south, a third and final leg of the alignment would lead transit through the California Avenue Interchange through to Contra Costa Avenue.