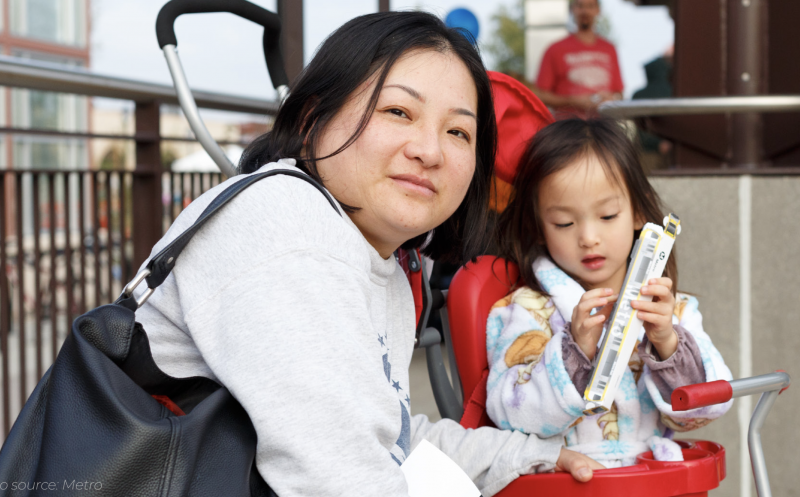 LA Metro recently published a first-of-its-kind study (in the US) entitled “Understanding How Women Travel.”  It is a frank assessment of the challenges faced by women when using the Metro system – from traveling with kids and strollers to safety to fares.  Here is an opening statement in the Executive Summary:

“Although women comprise over half of all transit ridership in Los Angeles County, their mobility needs, concerns, and preferences have not been critically accounted for in the way our transportation systems are planned.  As a result, women tend to bear outsized burdens and risks in the course of their daily travel.”

The study–that was written by the firm (and CALCOG Partner) Fehr and Peers— defines more precisely what many know intuitively: that women have different mobility needs, travel patterns, and commute demands from men and often face challenges using a system that is not designed for their needs.  Here are some (of many) takeaways from the 169-page report. (Editor’s note: The entire report is worth the read, there are so many significant findings, we had to refrain from writing a 169-page summary).

Safety concerns are the top barrier to riding transit. (But not the top concern for men). Sixty percent of female riders feel safe riding Metro during the day, but only 20 percent feel safe at night. These concerns are associated with waiting at stops/stations or traveling to stops/stations.

Women reported wearing sneakers on the bus or train in case they need to run from an assailant. Some also avoid wearing skirts because they did not want their bare skin to touch the seat and out of being sexually harassed. Women reported that they hide their jewelry due to fear that it may be stolen, and said they had observed people being robbed on public transportation.

The report noted specifically that “over and over, participants (in the study) pointed to problems that could be solved by a deeper investment in lighting, more frequent service to produce shorter wait times, and other solutions at stops and stations.”

Access concerns voiced by women include the physical design of transit spaces, financial ability to pay for transit trips for themselves and those in their care, the challenges of traveling with children, and the travel needs of women with disabilities. After safety, this set of concerns were major contributors to the decisions women make about their travel choices and how they do or do not use transit to help meet their travel needs

Although many women riders knew a monthly pass would save money, the up-front costs were too high.  They seem to prefer case for its flexibility (TAP cards may only be used for a single person and cannot be used to pay for children accompanying the rider). Moreover, women reported that children’s fares are confusing and difficult to understand.

Women were more likely than men to use elevators and escalators, as well as benches and other seating, and were observed to be traveling more frequently than men with bags, carts, strollers, and other items and people in their care. Older women and women traveling with children reported having a difficult time maneuvering with strollers and carts on the bus.

In addition, older women and women with limited mobility had difficulty moving through the aisle while buses were in motion. These groups were more likely to wait for the bus to come to a full stop before exiting the bus. They were also more likely to take the first seats that were available from the front of the bus. Some operators seemed aware and were accommodating and waited a few seconds before leaving a bus stop.

The top three complaints filed by female Metro bus riders are all related to the reliability of the bus system – buses that fail to stop for riders, buses that never show up, and late buses. Metro also heard numerous complaints about unreliable real-time information on station signs and cell phone apps. From the report: “These experiences cause women to alter their travel behavior – sometimes leaving hours ahead of time due to unreliable service, using ridesharing services instead of transit due to infrequent service at night, carrying a flashlight to ensure that they are not passed up by operators while waiting in the dark, or even sleeping at the bus stop because service does not start running until several hours after they get off work.”

To the rider, the consequence of an unreliable system can result in daycare fines, missed appointments, and lost employment opportunities. The report notes that these “challenges become even more difficult when traveling with children or trip-chaining, or for women with jobs or household responsibilities that require travel during mid-day, late night, or early morning periods, or on the weekends.”

This study is Metro’s first step in developing a Gender Action Plan for the Future. This will allow Metro to focus on the issues women cite as barriers to taking public transit and finding real solutions to these barriers. These solutions could include providing more lighting at transit stations for people waiting to get picked up as well as more security around the stations.

The Gender Action Plan will:

How LA Metro Got to This Point: The Women and Girls Governing Council

Finally, it’s worth noting that the report was at least an indirect outcome of the support for the Metro’s Women and Girls Governing Council. The council was among the first to recommend finding solutions for the barriers that keep women from riding transit. The WGGC was established in September 2017 to examine Metro policies, programs, and services, as well as make recommendations to the CEO. With consideration of the unique obstacles faced by women and girls, the council looks to find opportunities to remove barriers to success and expand opportunities at, within, and on Metro.

The council is comprised of a diverse group of Metro employees representing every department—union and non-union, entry-level to executive—that meets monthly to develop recommendations to the CEO to help advance and empower women and girls. This group of women and men work together for effective, innovative, and collaborative change, examining Metro policies, programs and services through a gender lens. The council applies a gender lens in three focus areas: Metro as an employer, Metro as a service provider, and Metro as a catalyst for economic development. It is the council’s objective to reveal and identify challenges and barriers that women may face and incorporate an intentional change approach to remove those obstacles and challenges.

You can read the WGGC’s Year in Review staff report.  It’s a great overview of their scope and focus.